The future of British rock and metal festivals

With Black Sabbath, Soundgarden, Faith No More, Motörhead and Soulfly (and Wolfmother…) set to fill the main stage of a day at British Summer Time festival in Hyde Park this July, it struck Raziq Rauf that the same bill could easily have been announced in 2000 to the same fanfare. What has (or has not) happened in the last 14 years for this to be the case and what does the future have in store?

What is the future of music festivals? I’m not talking 2015 (because 2014’s summer season lineup is just about fully lined up), I’m talking about something more like 2025. What is going to happen to our music festivals in the next ten years? Will Metallica still be headlining on a rota with Slipknot, Iron Maiden and Linkin Park? The classic rockers like Aerosmith, Def Leppard and Black Sabbath have a shelf-life. Are Avenged Sevenfold or Rammstein the answer? While they sell out arenas in London and that simply translates to headlining Donington or Knebworth, neither have ever had quite the same impact as those first mentioned few and they likely never will.

The time of selling 20 million albums is over. Metallica did it with the Black Album in 1991 and then in 2000, Linkin Park got in there just before the internet stopped that ever happening again. Lars Ulrich must have been happy about that. Hybrid Theory is, of course, being celebrated in its entirety at Download Festival this June but there are surely only so many times this can go on. Linkin Park won’t be returning to any festival to play Meteora or Living Things all the way through, will they. No. No, they won’t.

The fact of the matter is that since Linkin Park and Slipknot, no more viable festival headliners have emerged. Muse and Foo Fighters are too big a deal and it would certainly be argued that neither are “metal enough” for such events and the jury is currently still out on Avenged Sevenfold. This is a much-discussed topic and there is little more to add to the There Won’t Ever Be Another Metallica argument (reasons: so much more choice now you don’t have to just go for the big band; mainstream radio won’t touch metal now because it is vocally too extreme now; competing for consumption time with video games and other media) but we can speculate over the future.

While the big promoters are slurping up the very, very last dregs of our heavy metal heritage with their lineups – an argument can be made there that the major festival organisers may not have learnt the lessons that the major labels never went to school for in the first place – there are plenty of other festivals all around the UK that are in rude health and this, I believe, is the real future of metal festivals. Without the likes of Metallica et al to shift tens of thousands of tickets, they’ll naturally be smaller, but there will be more of them and they’ll be more tailored to the audience’s tastes.

Look at Damnation Festival. They’ve got Bolt Thrower and they’ve got Raging Speedhorn. They know exactly what their clientèle requires from a weekend away in Leeds. It’s the tenth edition one-day festival and they’ve slowly but surely increased the number of bands but have retained a capacity of 3-4,000. The key to their business model is getting those exclusive, flagship headliners. Carcass last year, The Dillinger Escape Plan in 2010, Bolt Thrower’s only gig of 2014. That is what people will pay their money for and it’s value for money as well. £36 for a day of intense and intimate heavy metal while it’s £205 for either of the big two festivals? Maths.

Raging Speedhorn are hitting the nostalgia trail in 2014

Because of its stature and reputation, it almost seems odd talking about Bloodstock Open Air as a mid-sized, independent festival but the fact of the matter is that it’s a non-corporate extravaganza that is just far enough from the mainstream of multi-million selling bands. Yes, they’ve got Megadeth and Down headlining this year, along with Emperor, but if Dave Mustaine and co have sold millions in the past, it’s firmly in the past. These are not arena-level bands now. It’s the same with previous big names like Machine Head (who tried and failed) and Lamb of God, who will have Brixton Academy named after them on their thirteenth appearance. That’s just where they’re at. They have a ceiling – a pretty high ceiling, but a ceiling none the less.

Bloodstock has expanded to accommodate the level of those bands and it currently seems sustainable with a reasonable ticket price of £130. Their ambition, however, suggests they’d like an enormous band and an enormous crowd but let’s hope they don’t over-egg their currently delicious pudding in the future.

Temples Festival is a brand new festival in Bristol and with Electric Wizard, Neurosis and Clutch headlining, is aimed at anyone with a beard or appreciates beards. That is fine. That’s a fantastic headline triumvirate and it’s good to see a festival lineup curated so keenly. Another festival making its first appearance is Jabberwocky and it’s another model that could be followed in the future. While Sonisphere has spread its brand all the way across Europe over the last few years, this is a collaboration from across the globe between ATP, Pitchfork and Primavera Sound. Between the three of them they’ve cornered every single hipster market around. The thing about hipsters is that they buy tickets to stuff, which is a cool market to aim at if you’ve got tickets to sell.

Two established urban festivals making their returns are Supersonic and Desertfest. Again, they know exactly who their audience is (art rock aficionados and stoner longhairs respectively) and that is why they are flourishing without the aid of major financial backing. The latter, based in London, allows those in the capital to simply go back to their homes and their own beds at the end of each day. There’s no camping or any souped-up VIP packages being hawked around for a week’s salary. You can go eat in Wagamama or Byron or whatever fancy fast food chain you fancy, rather than just eating another shit, overpriced portion of noodles out a carton of contempt. It’s comfortable. 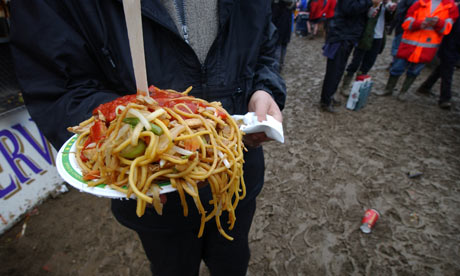 Noodles. If they’re not on the plate, they’re on the grass you’re about to sit on

Those mid-sized festivals are all growing and they’re growing organically with incredibly varied lineups but there is still an argument that the likes of Clutch, Raging Speedhorn and Megadeth are just as old but the difference is that they’re not as tired and hackneyed and played to repetition. If you asked me if I enjoyed the Metallica festival headline set, I’d have to ask if you meant 2004, 2006 or 2012 at Download, 2009, 2011 or 2014 at Sonisphere, 2003 or 2008 at Reading or Wembley 2007. Including the Leeds legs of Reading Festival and the other Wembley gig, that’s 12 enormous UK shows in 12 summers. Maybe it’s just familiarity breeding contempt but absence would certainly see my heart grow fonder.

People are never going to want to stop experiencing live music, though. Indeed, for the teenagers of every generation, visiting a major music festival is a rite of passage and maybe a huge cornucopia of mid-level, pretty popular rock bands of the moment without the megalithic metal behemoth of a heritage act residing at the top of the bill is what they’ll experience in the future. Maybe they’ll fork out their two, three, four hundred pounds and that will be their fill of bands for a few months because it could be a reaction to the commoditisation of music into digital, away from the tangible and the increase in consumption of video games and home entertainment generally. If the trend of music becoming a commodity more than an artform does increase, maybe all the majority of folk will ever want to do is see Metallica live. I’m sure holographic imagery will have come a long way by the time they decide to retire.

The bottom line is that people of all ages still like getting out of the house and actually experiencing something live and in-the-moment. They will always pay for a destination and they will pay to be with amongst those with similar interests. That’s why Download, Sonisphere and Reading all exist. That’s why Black Sabbath are playing in Hyde Park, allowing thousands the opportunity to experience an outdoor festival atmosphere with the benefit of nipping back to their homes with hopefully fantastic memories. While festivals on the whole are increasing in number, it’s the mid-sized contingent that is growing in confidence, and they have little chance of losing their talent to the perils of old age.

Which festivals are you going to this summer?

Who do you want to see headline the summer festivals in 2011?